New York City: the 20 best things to do and see with your kid(s)

Ten years. That's what I had always considered an appropriate age at which to take our son Nicolas to my favorite place in the world, New York City. My reasoning was that of a first-time mother (and a former NYC resident). At ten, Nicky's feet would be able to keep up with the fast pace of New York City's 8.5 million inhabitants. At ten, his ears would be able to withstand the 90dB sounds of the screeching subways, the honking cabs, and the wailing police sirens. At ten, my son would be able to absorb the magical explosiveness that is NYC and that I love so much. Ten sounded good.

While Nicolas spent many summers only a few miles away from New York City, each year inching his way closer to the double-digits, I kept envisioning the summer of his tenth birthday, making (and revising) lists in my head over the years. What would I show my son first? What would be the must-see places for my little man? How could I make his first visit fun, informative, and yes, personal?

Since the blink of my eye equals a year in my children's life (seriously, time, stop it!), Nicky turned ten last summer - just. like. that. His feet were now my size (yikes!), and the noise in our home put NYC dB level to shame. It was time to take my little son to The Big Apple. I had less than 48 hours with a ten-year-old (whose energy level matched that of the city we were about to visit) we were going to make them count.

We started our NYC adventure on the corner of 58th Street and 5th Avenue, in the Grand Army Plaza, next to the General William Tecumseh Sherman Monument. I love this location as it is so wonderfully busy and possibly one of the best starting points to 'ease' a ten-year-old, first-time visitors into the craziness that is Manhattan. There are street artists and vendors, white horse carriages and yellow cabs, Central Park's lush nature (especially in summer) next to NYC's defining skyscraper silhouette.

To the north of the Plaza, at 60th Street, is Scholar's Gate which leads into New York's Central Park. To the West stands the grand Plaza Hotel (to Nicky's delight - he had just watched Kevin Alone II ) with the beautiful Pulitzer Fountain and the Plaza food hall (on the concourse level of the Plaza Hotel). To the South, you'll find 58th Street with the famous Bergdorf Goodman department store. To the East, you have Fifth Avenue with Apple's newly redesigned 'cube' flagship store (former famous toy store tenant FAO Schwarz continues to make children's dreams come true at their new location at 30 Rockefeller Plaza).

From the Grand Army Plaza, we started walking down Fifth Avenue, passing the Trump Tower, and arriving at the Rockefeller Center. We entered the Center Channel Gardens - which are in full bloom in August and just stunning. Passing the famous Atlas statue, we continued towards the Lower Plaza, with the golden Prometheus centered above. I showed Nickys where the annual Rockefeller Center Christmas tree is put up at the end of November and where The Rink at Rockefeller Center replaces the outdoor cafe in the wintertime. Rockefeller Center also offers tours of its attractions and if you have time, go and check out the Top of the Rock Observation deck. #topoftherock

Rockefeller Center offers many shopping opportunities, also for kids. There are the FDNY Fire Zone, the Nintendo store, FAO Schwarz and then there is the famous Lego Brick Store at Rockefeller Center which contains the largest selection of Lego sets, and the tallest Pick a Brick wall. And to a ten-year-old Lego fanatic, this means something! Nicky browsed and played for a long time, he especially loved the digital box where you can scan your Lego set of choices and see that set come to life in 3D - very cool.

Since there are several famous landmarks just around Rockefeller Center, I made sure that Nicky got to see these too: we visited Radio City Music Hall and I told him about all the great artists that perform here and events that take place - like his mummy's graduation ceremony from NYU in 2002! If you have time, Radio City Music Hall also offers tours, otherwise, it's a cool place to see, even if it is just from the outside.

5. The Cathedral of St. Patrick

Across from Rockefeller Center, between 50th and 51st street, is another prominent landmark: St. Patrick's Cathedral (as it is commonly called) - the largest gothic-style cathedral in the US. It is one of the most beautiful churches I know, can accommodate 3.000 people and attracts more than 5 million visitors from all faiths every year. It was very special for me to take Nicky to one of my most cherished places in the world and we highly recommend a visit: for the history, the architecture or for whatever it is you need. In the true family tradition, I lit candles with Nicky for all our loved ones that day - just as my mother always lights candles at St. Patricks's cathedral with me.

The next part was one of Nicky's absolute highlights: a visit to the NBA store NYC, located at the corner of 5th Avenue and 45th Street. As a huge New York Knicks fan (thanks to his father), this 2300m2 store is my son's paradise: there is basketball-related merchandise of all NBA teams on three fully decorated floors. There is so much to see and do that we actually had to return for another visit the next day to ensure that Nicky had done. it. all.: played the video games, created his own Panini stickers, and - obviously - threw some hoops on the second floor.

After what felt like hours in the basketball paradise, it was time for us to jump on to the 4,5,6 train (the green line) and ride the NY subway to Bowling Green Station (this in itself was a small event for Nicky). We walked into Battery Park, one of the oldest parks in all of Manhattan, and after stopping to see street artists perform, made our way to an old classic for lunch: Gigino at Wagner Park. 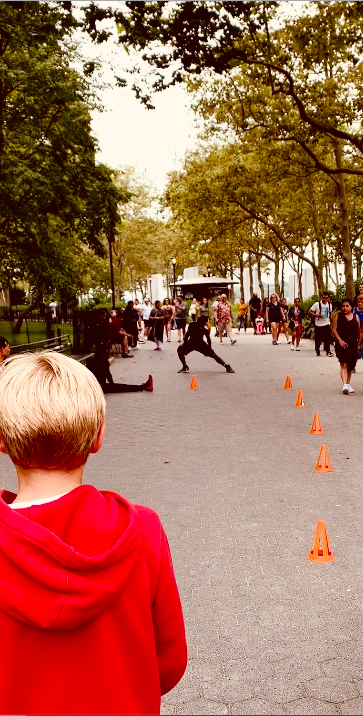 Gigino at Wagner Park has been around for almost 20 years and offers Italian cuisine with an incredible view of Lady Liberty and the New York harbor (especially in the summer). I have spent romantic evenings, birthdays, and the 4th of July here (which was truly a one of a kind experience) and it really is something for every occasion. And while some say that the staff could be more attentive, I always feel that the view makes up for anything. You can check out the menu or make reservations here.

After lunch, we took the ferry to Liberty Island and there are three specific reasons why I thought it important for Nicolas to visit:

While our son had seen countless print and TV images of this national treasure, it is quite something else witnessing Lady Liberty grow taller and taller before your own eyes as you approach Liberty Island by ferry. And her sight at close range is impressive: she stands 305ft. and 1in. tall, which! - apparently - is the same as 22 stories of a building! Seeing the torch, the famous 'tabula ansata' (with the date of the US Declaration of Independence in Roman numerals), as well as the shackles around her feet up close, is immensely powerful. At least it is for me, every time I visit. And I hoped it would be the same for Nicky.

Secondly, I was eager for Nicolas and me to experience Liberty Island's newest addition: the Statue of Liberty Museum, which opened its doors on May 16, 2019. Built with sustainability in mind, the museum offers its 4.3 visitors the opportunity to dive deep into the Statue's history. There is the Engagement Gallery (that highlights the idea of liberty through interactive media, artifacts, and graphics), the Inspiration Gallery (inviting visitors to document their visit) as well as The Immersive Theater (offering a virtual fly-through experience of the Statue itself).

We loved the museum! It not only enhanced but truly completed our experience on Liberty Island as it was so informative and - through the use of interactive media - so much fun for Nicky! We especially liked being part of the "Becoming Liberty" exhibit (where you take a picture of yourself and select an image that embodies what liberty means to you. Your photo then joins others' in a picture collage on a large screen, forming the Statue of Liberty). We felt humbled as we saw ourselves as a small part of an entire whole on the screen and, at the same time, empowered to be reminded that it takes all of humankind to build one beautiful whole.

And finally, I took Nicolas to Liberty Island for the view. Looking onto Manhattan from afar always makes my heart jump for joy as I remember that some of the most meaningful and memorable moments of my life happened on the Island in front of me.

And as I held Nicky's hand tight at that moment, my hope was that he would fall in love with New York City just as I did many years ago. And boy, if today didn't do it.... we still had tomorrow!

PS: If you are wondering where we went for dinner that night, I will admit: we did not go child-friendly (as in Planet Hollywood, which is what Nicky wanted). Since this was our only night in town, we went to where we always go for the best sushi in town: Blue Ribbon Sushi Bar & Grill at Columbus Circle. For us, the best sushi in town. For now. Hey - it's Manhattan, after all!

Autumn notes: how to stay in tune with the seasons - body and mind

Moving abroad: the biggest change of all

5 things that change when you live abroad